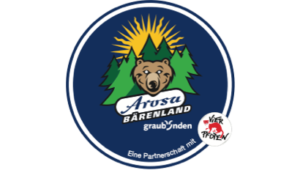 Together with the animal welfare organisation FOUR PAWS, Arosa Tourism and the Arosa Bears Foundation established the innovative and sustainable project, the Arosa Bear Sanctuary. More than eight years of project work later, the animal welfare project celebrated its official opening on the first weekend in August 2018. The Arosa Bear Sanctuary is the first bear conservation centre in Switzerland. Bears that had been forced to live in chains in tiny cages are freed from their miserable existence and brought to Arosa. In the midst of the natural mountain landscape with pastures, shrubs, rocks, several ponds, forest and snow, the bears are able to return to a more natural way of living in a suitable home. The Swiss bear conservation centre can accommodate up to five bears. In July 2018, Napa († 4.11.2020), a former Serbian circus bear, was the first to move in. Half a year later, in February 2019, two former Albanian restaurant bears, Meimo and Amelia, arrived in Arosa. And in December 2020, Jambolina, a former circus bear, was brought to Arosa Bärenland from the Ukraine. The once mistreated bears gradually returned to a more natural way of life at the Arosa Bear Sanctuary. This includes exploring their habitat, foraging, socialising with other bears and, last but not least, enjoying their natural hibernation.

The Arosa Bear Sanctuary combines sustainable animal protection and innovative tourism. This bear conservation centre is a place of solution-oriented animal protection. It promotes, informs and makes it possible to experience the bear in its natural environment. Visitors are presented with a unique and sustainable experiential setting. A number of educational elements at the visitor centre provide visitors with information about animal welfare. The different fates of the bears are displayed, with films of the rescue shown and interactive information conveyed. The visitor platform provides useful information about bears specifically aimed at children or adults. Finally, in the outdoor area, the bears can be observed surrounded by nature. Alongside the visitor platform, themed touristic experiences round off the visit.

8 long years to reach the goal

When it was announced in July 2010 that the two young bears at the Bern Bear Park would have to be moved, the destination Arosa offered to build a facility and to take the bears. A project group was set up and drafted an initial proposal. In the autumn of 2010, Arosa received a sizeable sum as a legacy, which was earmarked for the Arosa Bear Sanctuary project. In the following spring, the civic authority of Arosa opposed the provision of the “Bärabad” site for the creation of a bear park. The project group then examined alternative locations.

In November 2012, the animal welfare organisation FOUR PAWS contacted Arosa Tourism and expressed an interest in collaborating on the Arosa Bear Sanctuary project. In 2013 and 2014, various locations and concepts were investigated and the “perfect” location was evaluated. Finally, the right location was found, and in June 2015 the civic authority of Chur approved the use of the perimeter next to the intermediate station of the Weisshorn cableway for the Arosa Bear Sanctuary. In November 2016, a vote was held to rezone the perimeter. The Arosa Bear Sanctuary received a resounding yes from 78% of the population of Arosa.

In December 2016, the “Arosa Bears” Foundation was established and the planning application for the basic infrastructure (enclosure, shelter and visitor platform) was drawn up. From April 2017, the Arosa Bears Foundation developed additional experience elements with the aim of positioning Arosa as a “bear village”. A further milestone came in May 2017 when the government of the canton of Grisons approved the partial revision of the local plan for the “Arosa Bear Sanctuary”. In July 2017, the lease to use and run the Arosa Bear Sanctuary was signed between the Arosa Bears Foundation and the civic authority of Chur. After the building permit was issued on 2 August, the groundbreaking ceremony took place on 31 August and on 2 September 2017 the construction of the Arosa Bear Sanctuary began. Construction continued as planned until the first big snowfall in mid-November 2017. After the winter break, construction resumed in April 2018. The Bear Sanctuary was completed in early summer, and in July 2018 the first bear was brought to Arosa.

The first year in the Arosa Bear Sanctuary

In July 2018, Napa, a former circus bear, was transferred from Palic in Serbia to Arosa. He was the first bear to take up residence at the Arosa Bear Sanctuary. On the long weekend of 3 to 5 August 2018, the Arosa Bear Sanctuary was opened in the presence of Federal Councillor Doris Leuthard and many other invited guests. Over the summer months, many happy visitors to the Arosa Bear Sanctuary were able to take a look at how Napa was getting along in his new home. Informative elements in the entrance area provide information about the suffering that mistreated bears have to endure. It is also possible to follow Napa’s transportation on an iPad. If you don’t want to spend all your time on the visitor platform, the bear minigolf and a playground are nearby.

In November 2018, Napa began his winter hibernation, and in January 2019 the outdoor enclosure had to be closed because of all the snow. On 1 February 2019, the long wait came to an end and the two new bears Amelia and Meimo from a restaurant in Albania arrived in Arosa. In early April 2019, Napa ended his hibernation, and on 18 May 2019 Amelia and Meimo were allowed to enter the outside enclosure for the first time. In July 2019, Amelia and Meimo were socialised successfully with Napa, and from then on all three bears were able to use the entire enclosure together.

The Arosa Bear Sanctuary bear conservation centre was opened in 2018. As a next step, the aim is to secure the sustainable promotion…